Ayatollah Alireza Arafi, a Faqih member of the Constitutional Council and head of Iran’s Seminaries, held separate meetings with the head of the Catholic Church Pope Francis and high-ranking prelates at the Vatican. 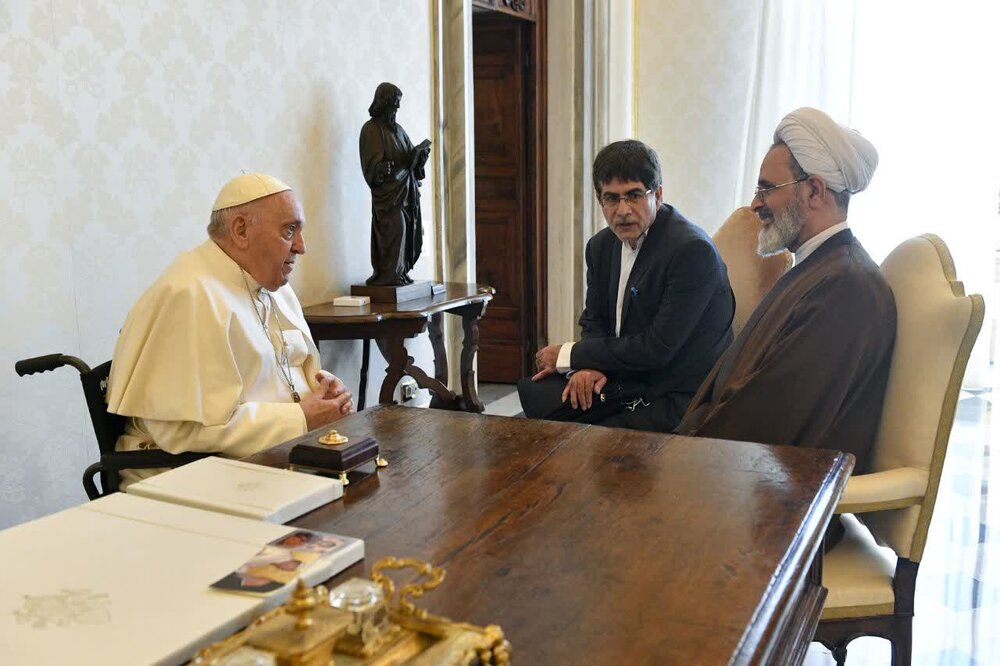 During the meeting with the pontiff on Monday, Ayatollah Arafi highlighted the importance of convergence among divine faiths, noting that positive and constructive interaction among religions can help address social, cultural and ideological challenges of the contemporary world.

The high-ranking Muslim scholar added that the diversity and multiplicity of religions is an ideal opportunity for human societies to deepen their understanding and visions and exchange their achievements.

“Shaking the foundations of theism, decline of spirituality, lack of belief in the hereafter, undermining family and high status of women, sanctions and cruel pressures against nations, poverty and hunger, warmongering, occupation, systematic international brutality, environmental degradation, and rise of extremism are all among the contemporary world’s greatest challenges. These cannot be addressed without the effective role of divine faiths”, Ayatollah Arafi further stressed.

The prominent Iranian cleric presented the pontiff with refined artifacts from his hometown of Meybod, in Yazd province, and the holy city of Qom.

Iran and the Vatican established full diplomatic ties in 1954 and the bond has remained uninterrupted ever since. Not many reflect on the fact that the Vatican and Iran both represent spiritual traditions that have much more in common than might initially come to mind.

Ayatollah Arafi's visit to the Holy See coincided with the commemorations of the 33rd anniversary of the demise of Imam Khomeini, the late founder of the Islamic Republic of Iran.

On Sunday evening, the senior cleric paid a visit to the Imam Mahdi Islamic Center where he met with members of Rome's Shia community. There, the cleric attended a commemoration of the late leader of Iran's 1979 revolution.

The commemoration held at the Imam Mahdi Islamic Center was also attended by Iran's diplomats and representatives of Rome's Palestinian community.

In November 2020 Ayatollah Arafi sent a letter to the Holy See in which he expressed his concerns regarding insults made against Prophet Mohammad (Peace upon Him) and the hatred expressed by some magazines, journalists, and political figures in different societies.

In response to the letter, three months later, Pope Francis replied to the Iranian cleric saying he was concerned for those affected by aggression and insults of religious figures, symbols, and sentiments.