Leader of the Islamic Revolution Ayatollah Seyed Ali Khamenei highlighted the importance of the unity of Muslims, describing Muslim unity as a "definite duty and a Qur'anic order". 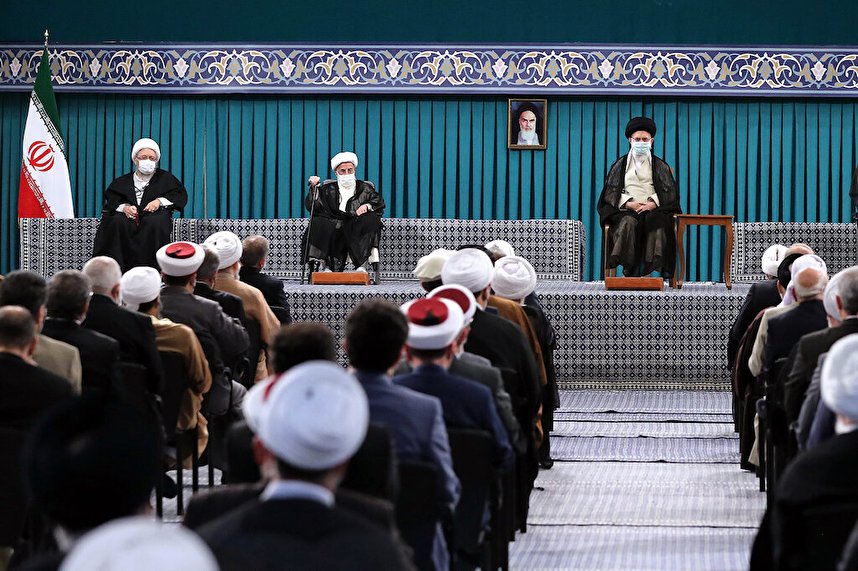 On the occasion of the auspicious anniversary of the births of the Holy Prophet (peace be upon him) and Imam Sadiq (pbuh), the heads of the three branches of government, a number of government officials and the guests attending the 35th International Islamic Unity Conference met with Imam Khamenei, the Leader of the Islamic Revolution, on Sunday, October 24, 2021

In this meeting, after offering his congratulations on the occasion of the blessed anniversary of the birth of the Holy Prophet of Islam, the Leader of the Islamic Revolution described the anniversary of this birth as being the beginning of a new era in human life. He referred to the status of Prophet Muhammad (pbuh) as being unique throughout humankind’s creation. In referring to the descent of the Qur’an on the heart of the Prophet of Islam, Imam Khamenei said, “God, the Exalted, revealed the hidden book to the holy heart of the Prophet, uttered it using his pure tongue, entrusted him with the plan for humankind’s happiness in its entirety, and commissioned him to carry out this plan and demand that his followers carry it out as well.”

Imam Khamenei posed this question, “What is the duty of Muslims and believers toward the Prophet of Islam?” He also spoke of two issues, “One is the issue of acting in accordance with the all-inclusiveness of Islam, and another is the issue of the Muslims’ unity. These two issues are among the most important issues of our day.”

He explained the efforts of anti-Islamic powers by pointing out that political, material powers insistently try to limit Islam to individual actions and belief. And they try to promote this belief among people. Describing the actions of anti-Islamic powers, he stated, “From the viewpoint of these powers, important areas of life and social relations must be separated from the interference of Islam. With regards to the management of society, building civilization and in accordance with this inwardly political and ostensibly intellectual tendency, Islam has no role in the construction of human civilization and it has no duty and no possibility of helping in this.”

The Leader of the Islamic Revolution stated that the reason for such insistence on separating Islam from the social and political spheres is rooted in the anti-Islamic attitude and goals of the big political powers in the world. He added that Islamic texts explicitly reject this belief. Explaining the duty to act in accordance with the all-inclusiveness of Islam, he said, “We should embark on clarifying the viewpoint of Islam about itself and about those aspects of life where it has given an opinion… What Islam states is that the field of activity of this religion is all of human life, ranging from human emotions to social, political and international issues. It also includes issues related to all of humanity.”

Stating that Islam has something to say in all important aspects of human social life, Imam Khamenei said, “A person who is interested in the Qur’an, is familiar with the Qur’an and understands the rules of the Qur’an realizes that this is the Islam that the Qur’an introduces.”

Imam Khamenei went on to explain the concept of the “Imam” being the leader of the Islamic community. He asked Muslim scholars to analyze and explain the issue of Islamic government. As for the second issue, Islamic unity, he mentioned and praised the prominent figures in the field of Islamic unity. He recalled the efforts of Imam Khomeini (God’s mercy be upon him) and also said, “The Muslims’ unity is definitely a Quranic obligation. Why are we trying to turn it into a mere moral issue? This is a command and a decree.”

He described the unity of Muslims as being a fundamental issue and not a tactical issue, “Cooperation between the Muslims is necessary. If the Muslims are united, they will help each other, and they will all become strong. Even those who are interested in interacting with non-Muslims, and there is no objection to interacting with non-Muslims, will enter into such interactions with full hands. This will come about when this state of cooperation exists.”

The Leader of the Islamic Revolution stated that the reason the Islamic Republic places so much emphasis on the issue of unity is the separation that exists between Muslim denominations and also the organized efforts of the enemies to create discord. Mentioning that Shi’a and Sunni expressions have entered the literature of American politics, he said, “This is the reason we emphasize Islamic unity. As you see, the puppets installed by the US create discord in the world of Islam wherever they can.”

In referring to the crimes committed against the Afghan Shi’a, Imam Khamenei stated, “The closest example is the tragic events that have taken place in Afghanistan the last two Fridays where they blew up a mosque with the Muslims in it while they were praying. Who blew these up? DAESH [ISIS]. Who are the DAESH? The DAESH is the same group that the Americans—the Democrats in the United States—have clearly stated, ‘We created them.’ Of course, they do not acknowledge this at the present time. They deny it now.”

The Leader of the Islamic Revolution went on to offer a solution for the problem of the attacks on the Afghan Shi’a. He said that it is necessary to formulate plans for the issue of unity everywhere in the Islamic world. He said, “In the case of Afghanistan for example, when I say that we need to formulate plans, one way to prevent these attacks is for the current, esteemed Afghan officials to go to the mosques themselves and to say their prayers there. Or they should encourage the Sunni brothers to participate in these centers.”

Imam Khamenei stated that one of the goals of the Islamic Republic is to create a new Islamic civilization, and he stressed that this is not possible except with the existence of unity between the Shi’a and Sunnis. The Leader of the Revolution considers the issue of Palestine to be a major indicator for showing the unity of the Muslims. He explained, “If the unity of Palestine and of Muslims is realized, the issue of Palestine will definitely be resolved in the best way. The more serious we are about the Palestinian cause for the sake of asserting the rights of the Palestinian nation, the closer we will be to the realization of unity between Muslims.”

He lamented the mistake made by some governments in normalizing relations with Israel and said, “Unfortunately, some governments made a mistake. They made a big mistake. They sinned by normalizing relations with the usurping, despotic Zionist regime. This move is against Islamic unity and solidarity. They should turn back from this path and compensate for this grave mistake.”

In addressing the Iranian nation at the end of his statements, Imam Khamenei said that following the great Prophet of Islam is dependent on adhering to and following his example, especially in the three matters of patience, justice and ethics. In emphasizing that we need stability more than anything else today, he addressed the government officials and stated, “You should continue on the path with steadfastness, resistance and endurance, and you must never stop.”

The Leader of the Islamic Revolution described justice as being the most important intermediate goal of the prophets and stated, “The Holy Qur’an considers the administration of justice to be necessary even in the case of enemies. We should learn to behave in a fair way. Even when we are in a situation where we do not agree with someone, we should not taint our opposition with slander, lies and insults.”

The last point that the Leader spoke about was behaving like the Holy Prophet. He said, “Islamic ethics means humility, forgiveness, having a mild behavior, doing good to others and refraining from telling lies, slandering and having doubts about other Muslims. These points should always receive our attention as permanent guidelines.”

Imam Khamenei emphasized that, “When we claim to be Muslims and representatives of the Islamic Republic, this must be accompanied by action. In our actions, we must be followers of the Holy Prophet.”